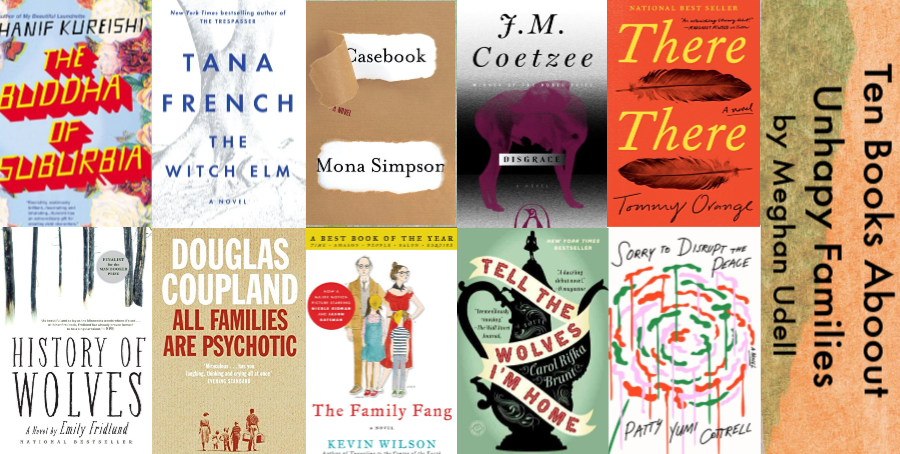 Televisions and movies would have us believe that the time from late November to the new year is a run on love, togetherness, and eggnog sipped in front of an open fire, but real-life seldom plays out so nicely.  There are a multitude of reasons to dread the holidays, but whom amongst us hasn’t inwardly groaned about the family visit? Between the awkward conversations around the dinner table, or the long played out family feud, the holidays can invoke dread in the best of us.

Regardless of if you’re finding solace in the familiar, or searching for a reminder that things could always be worse, here’s ten books about dysfunctional families to help you get through the holidays.

Sorry to Disrupt the Peace, by Patty Yumi Cottrell
The call comes when 32 year-old Helen Moran is receiving an IKEA furniture delivery — A forgotten uncle has been tasked with letting the family know Helen’s adoptive brother has killed himself. More out of a sense of curiosity than familial obligation, Helen books a flight home to Milwaukee to investigate the abyss behind his suicide in this uncomfortable yet bleakley humorous tale of conformity and escape

The Buddha of Suburbia, by Hanif Kureishi
For anyone who has ever felt like an outsider, Buddha of Suburbia examines race, class, and cultural identity against the backdrop of 1970’s London. Son to an Indian father and an English mother, Karim lives a typical boring teenage life in the suburbs, but everything changes when his father becomes a self-styled Buddhist mystic. A whole new side of London becomes available to Karim as he attempts to carve out an identity and define his place within his ever changing family.

Casebook, by Mona Simpson
When Miles Adler-Hart starts spying on his mother, he doesn’t learn that Santa is a myth, or which summer camp he’ll be attending, instead he learns of his parent’s impending separation. Most kids would be scared off by that knowledge, but instead Miles and his best friend Hector dig deeper; bugging his mother’s phone and rifling through her drawers. Their sleuthing yields more questions than answers as they find his mother’s unlikely paramour, and Miles has to choose between letting his mother be happy and following the clues to the end.

The Witch Elm, by Tana French
The Witch Elm is billed as a crime drama, but it’s much more a story about privilege and empathy. Toby has a good job, a loving girlfriend and an ancestral home where his family congregates on the weekend, but a brutal crime causes his luck to turn. When a dead body is found inside a tree at his family home, long buried resentment seeps into family relationships and Toby is forced to reconcile the man he is, with the boy he thought he was.

Disgrace, by J.M.Coetzee
Trauma is such a deeply personal experience, that it would make sense we each grieve in our own way. This is a story of a father and daughter each trying to survive, but you can’t help but feel like the parental roles are reversed. Set in South Africa, the daughter Lucy, is steadfast and stoic, while her father David, is continually fleeing problems of his own making. When they both are victims of a violent crime, David tries to reassert himself as a parent, but the gesture is too little too late.

There There, by Tommy Orange
In 1969 a group of Native Americans occupied Alcatraz in protest. Although the occupation isn’t the central theme in the book, it sets off a series of events that weaves through this collection of vignettes. Focusing on twelve characters making their way to the Big Oakland Powwow, the reader is forced to explore uncomfortable family dynamics that are given an extra layer of rageful struggle as a result of European colonialism

History of Wolves, by Emily Fridlund
Under the best of circumstances teenagers struggle with belonging, but when you’re sequestered on the remains of a counter-culture commune in the remote woods of Northern Minnesota, ordinary insecurity morphs into a whole unique beast. Isolated Linda yearns to fit in, but when her history teacher is convicted of child pornography, she feels more alone than ever. That all changes when a captivating family moves in across the lake, and Linda finds herself lulled into a false sense of comfort as she begins to babysit their young son.

The Family Fang, by Kevin Wilson
It’s really no surprise that two children who grew up being used as props in their parent’s avant-garde performance art would have trouble navigating the world as adults, but the real dysfunction comes into play when Annie and Buster’s parents go missing. The siblings disagree if their disappearance is part of a crime or yet another performance piece, but the two are still forced to reconcile what happens when the manipulative voices of their parents goes silent. Don’t bother watching the movie, the book is a much more delightfully twisted look at a proverbial and literal crimes of the parents.

All Families Are Psychotic, by Douglas Coupland
Tolstoy said it best with “every unhappy family is unhappy in its own way,” but the Drummond family takes the cake for the most unique. The family of misfits and malcontents are convening in Florida to celebrate Sarah, easily the most successful member of the family, for her inaugural space launch. Within hours of arriving in Florida, the family descends into every imaginable illicit activity, not least of all smuggling a stolen letter to Disney World. Not one character is immune from the chaos and dysfunction, but if a one handed astronaut can succeed despite her family, then there’s hope for the rest of us.

Tell the Wolves I’m Home, by Carol Rifka Brunt
The complicated relationships of families take center stage in this heart-breaking debut novel about loss, and siblinghood. 15 year-old June is devastated when her beloved uncle Finn, a famous yet elusive artist,  succumbs to AIDS in the late 1980’s. His last piece of work is a mostly finished painting of June and her sister Greta. As the family each deals with grief in their own unique way, the painting becomes a symbol of buried secrets and the picture we paint for those around us.

Fun Home, by Alison Bechdel
Reading Fun Home is a lot like pulling up to a Quality Inn— The name is there, but you’re almost guaranteed a less than quality stay. In Fun Home, Alison Bechdel crafts an impeccably illustrated journey about growing up gay in rural Pennsylvania. The story is rife with literary allusions which serves as the constant reminder that books offer the best of us an escape from family dysfunction.