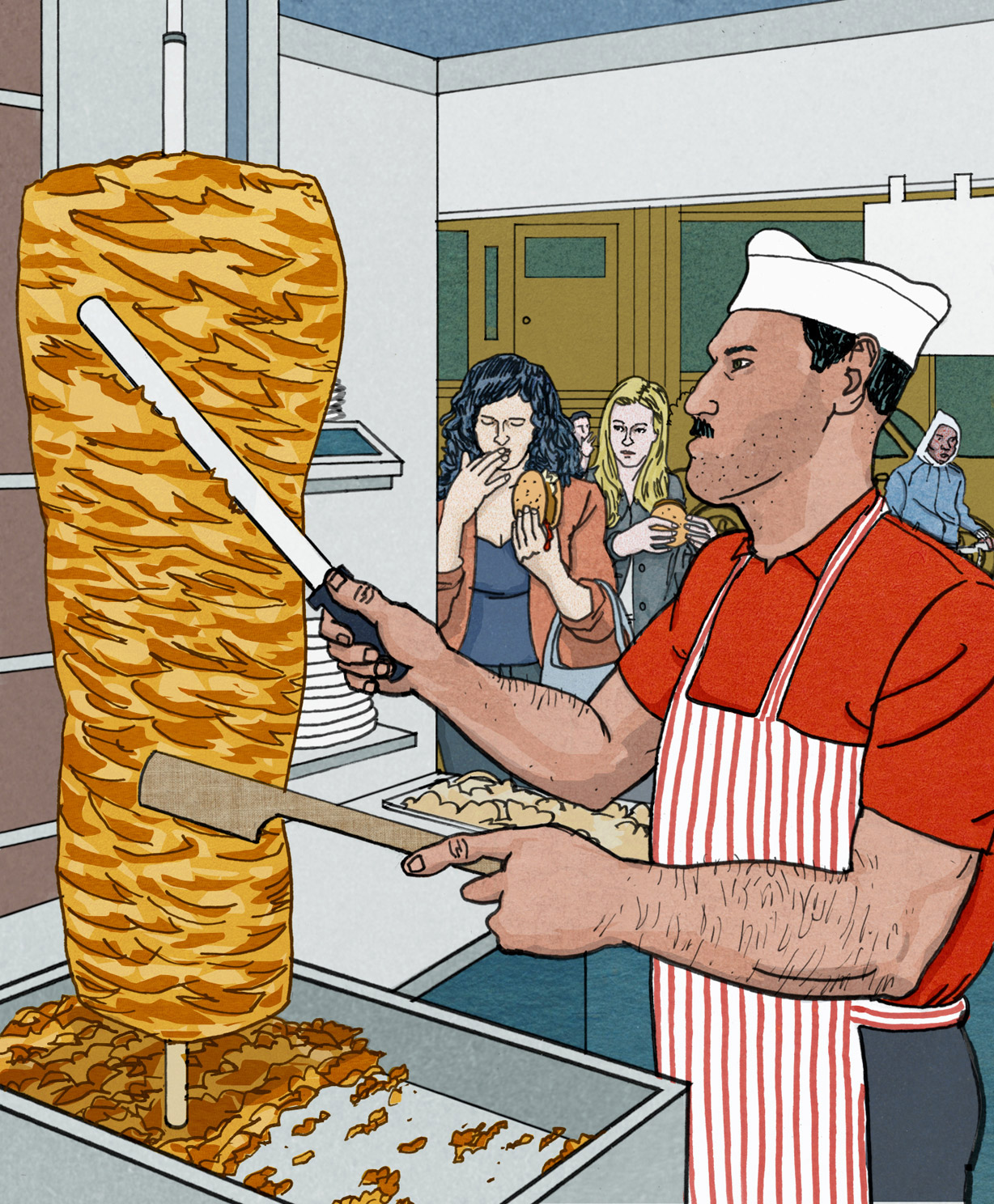 He serves a couple who have slipped in, quietly. They are polite and clean, too clean amid the grease worked into the bones of this place. The wife has a voice that transforms the word kebab, polishing it into a bright thing, like birdsong. It silences the others in the shop, who study the couple as if they themselves are rare and curious larks. This Farid understands. These are cherished people, unthreatened by life. He hands them their orders in a crisp white plastic bag, and they leave, hand-in-hand, content. The hush that fell under their voices evaporates. One of the white men says: “Well, I’d do her,” and his friends all tell him he’d be so fucking lucky.

What would he do to her? How could it make him luckier than he already is? Hassan understands their jokes, always laughing along and doing things to entertain, things like throwing the salad tongs into the air to catch them behind his back. He says these men are harmless, but Farid is unsure. He only knows he is harmless. The men, satisfied, begin to file out of the shop. Some of them toss their polystyrene boxes on the table and the drug addicts pick through their leftovers.

“Ugh, it’s fucking cold!” The tiger woman has finally taken a bite of her burger. “Chuck us on another one, mate,” she says and sighs.

Farid obeys and wonders if she means to pay for it. He feels anxious, suddenly oppressed by the heat and stench radiating from the fryers. The first rush has gone too smoothly, and now the shop, with the addicts dozing and the women still whispering in their corner, is too quiet. He has learned of the silence that explodes the second before a bomb. He has learned to be wary of peace.

“Two pounds, please.” Farid feels his voice boom, but the women hear nothing, or else a whimper they ignore. He looks at himself in the smudged steel of the grill. Still alive, but unappealing. Still young and yet the past eighteen months have aged him; he is almost as crinkled as Hassan. If Riad came, if he accepted the ticket and boarded the airplane and left his pride behind, would he even recognize his brother waiting for him on the other side? These women do not recognize him. Their whispers have grown louder, cut with panic, and the addict woman keeps glancing over at them, offering up her pity and concern. Farid is invisible. He wishes these women and their troubles would disappear.

To make matters worse, the black boys have returned. They ride their bicycles in lazy circles on the pavement outside the shop window. Apart from them, some of the white men mill about; they jostle each other now and then, their voices breaking through the shop glass. Some of them swig deeply from cans. Farid lifts the hatch, and places the order in the tiger’s hands this time, so she cannot forget it. He is too tired to ask for the money again.

“I am going to close up now,” he says, to her, to anyone listening. The drug addicts rouse themselves. “Come on,” Farid says, louder. “The shop is closing.”

Nobody objects. They all shuffle out of the door, which Farid is quick to lock behind them. One bolt at the top, one at the bottom, plus the key turned in the lock and the gold chain that slides across. Safe. But alone. At the large shop window he stands to watch his wasted company. The addicts, back in their element, care nothing for him and move swiftly into the night. The others linger. Tiger chews at her burger, dripping ketchup onto the pavement, yelling comebacks at the white men after each bite, while Beauty bends to re-lace her tall boots. She is first to see the hooded man sprint from across the street and she screams his name, high and short as a flare. The man’s eyes are wide and wild, and their whites rush at Hassan’s toughened glass, all too human. The black boys are surprised: he’s got corrosive init!The white men jeer: you’re a mentalist mate! Farid sees the Tiger drop her burger and the Beauty raise her hands to her face. Others have done the same thing, he thinks, as the women are doused.

More people appear: men and women, drawn by the sight of a gathering, by the sound of women screaming. There is confusion, and then a moment of stillness while they wait until it is clear: Beauty and the Tiger have been doused with water.

“You know this joker? What the fuck?” The black boys are shouting. They have surrounded the crying women; their thin, springing forms separate Beauty and Tiger from the hooded man, who stands back, with his mouth hanging open, turned aghast at his own prank, at his own cruelty. Can he see his reflection? A tight fist lands on the glass, just below Farid’s face. “You see that, fam?” says the starved boy who bought the chicken wings. “You fuckin’ see that shit?” Then he turns away.

Yes, Farid thinks. I see. These women are lucky. Water does not burn. He moves to the wall and kills the lights in the shop. The fight unfolding outside is framed by the window, softened and slowed by the glow of the streetlight. The Tiger is cowering. Sirens blaring in the distance squash the sound of the black boys and the white men shouting and Beauty wailing, trying to stanch the blows. The switchblade is heavy in Farid’s pocket. This is London. Somewhere out there Yara is bringing Hassan’s child into the world. Hassan is in the waiting room handing out cheap cigars to strangers and Yara is pushing and straining, and the baby is coming, on its way to live right here. Farid feels himself weaken. Yara. Her name lies like a swollen kernel on the tip of his tongue, ready for him to crush and swallow it. He takes a step back from the fray, which is bigger now, a battle. Nobody will win, Farid knows. If he speaks her name aloud now, nobody out there will care.