Roger Ebert called Bernardo Bertolucci one of the great painters of the screen. It’s a distinction the director—who has succumbed to cancer at 77—proved many times over, from his sprawling Oscar favorite The Last Emperor (1987) to the lush and undervalued Stealing Beauty (1996). In The Dreamers (2003), an audacious big screen adaptation of the novel by film critic Gilbert Adair, Bertolucci unleashes his painterly instincts right out of the gate with the graphic design of his opening credits. Scored to a guitar-rock soundtrack, the sequence sees the camera descend the Eiffel Tower, with arbitrary, architectural color blocking a la Mondrian. The names of cast and crew are alternately obscured and revealed amid the tower’s bolted beams, and the emergence of the title itself points to a definite ’60s Mod influence—the font suggesting it leapt from a Euro band’s vinyl album cover.

But this is merely the most literal example of Bertolucci as painter in The Dreamers, and as we learn immediately after that sequence, this film is not about music, but cinema. We land upon Matthew (Michael Pitt), a virginal but virile, pillow-lipped American in Paris who’s enamored of the Cinematheque Francais, despite it being part of a violent French revolt circa 1968. At the venue, Matthew meets incestuous twins Isabelle (Eva Green) and Theo (Louis Garrell), two fellow cinephiles who seem equally smitten with the American ingenue—a student who spends more time in theaters than classrooms. They invite him back to a nearby apartment, which has been vacated for a month by their mother and poet father (Bertolucci began as a poet, too, taking after his own father). 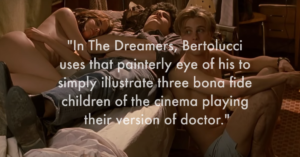 Within this apartment, The Dreamers either blossoms or descends—depending on each viewer’s take—into a miscrocosmic cocoon of hedonism, gameplay, film obsession, impromptu ratatouille, denial, and ample sexual discovery. In the United States, The Dreamers was slapped with an NC-17 rating, even though none of its sexual content feels gratuitous—not full-frontal shots of Matthew and Theo’s penises, not multiple scenes involving Isabelle’s menstrual blood. By 2003, Bertolucci was quite familiar with controversy: In 1972, he showed butter-lubed anal sex between Marlon Brando and then 19-year-old Maria Schneider. But in The Dreamers, he uses that painterly eye of his to simply illustrate three bona fide children of the cinema playing their version of doctor. Those scenes are punctuated with performance pieces befitting drama students (watch out for Green’s spot-on impression of Greta Garbo in 1933’s Queen Christina). What’s on display is surely a love triangle, with Matthew and Theo sharing kisses and sandwiching Isabelle. But the sex on screen isn’t so much queer as it is a further manifestation of this trio’s untethered rebellion.

And yet, the hypocrisy of their escapades is that the rebellion and the revolution are in fact happening outside their steamed-up windows—in the wide world that exists beyond the movie screens and celluloid dreams that have them drunk on fantasy. They are their very own Band of Outsiders, and in one of the most memorable scenes of The Dreamers, Bertolucci has them recreate the race through the Louvre made memorable in Jean-Luc Godard’s Bande à Part. But as the escapist allure of their indoor revolution is shattered (quite literally when a protester’s stone is hurled through an apartment window), Bertolucci’s final stroke is releasing Matthew, Isabelle, and Theo back into the wild, leaving the audience to wonder how much more innocence they have left to lose.